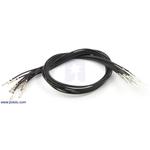 The Wires with Pre-crimped Terminals 10-Pack M-F 12" Black are stranded 26AWG wires with male terminals on one end and female terminals on the other end. Together with our 0.1" crimp connector housings, these wires can be used to make custom cables with 0.1" (2.54mm) connectors. These 12" (30 cm) wires have black insulation and ship in packs of 10.

These wires with pre-crimped terminals are equivalent to our premium jumper wires without the 1×1 crimp connector housings on the ends. By combining these wires with our crimp connector housings, you can quickly and easily create custom cables with 0.1" (2.54mm) connectors that mate with various 0.1"-spaced connectors, including male and female headers and solderless breadboards. Just pick the housing for the correct number of pins, pick the colors and genders for your wires, and snap them into the housings (note: it’s not easy to get the wires back out, so plan carefully!). No soldering is required!

You can easily make cable harnesses or assemblies that branch from one connector on one side to multiple connectors on the other (an example of this is shown in the picture to the right); you can also cut off one pre-crimped end and solder the wires directly to components to make swapping connections easy.

I bought tweezers (good for the cheap price) and flush diagonal cutters (Impressed!). Fast delivery. Many thanks.