COVID-19 NOTICE: We are currently unclear on online order delivery and courier shipping for non-essential services. Last call for orders to ship is 2pm Wed 25th. We will review this once we have more information.
Welcome to nicegear — voip and open source hardware specialists 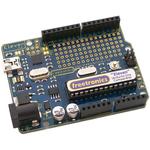 The Freetronics "Eleven" is just like an Arduino Uno - but better!
It is based on the existing Arduino Uno but with improvements and updates for ease of use, cost and getting started.
It's 100% Arduino compatible. Also included in the package are a USB cable, and our Getting Started guide sheet.

As well as the standard Arduino Uno features found here, the Eleven has the following improvements and updates:

Prototyping area
For those projects where you don't need the extra size or expense of a shield, the Eleven has its own standard prototyping area taking up a quarter of the board. Great for quick sensor and IC projects. There's extra power pads underneath for neat connections.

LEDs visible on the edge
Wondered what your Arduino was doing? We've carefully placed a nice blue Power LED, plus colour coded RX, TX and D13 LEDs on the right edge of the board so you can see what's going on.

Dual crystals
We've provided proper crystals for both the primary MCU and the communications MCU, rather than using a ceramic resonator.

Micro-USB Connector
No more short circuits of the large USB connector against your shields. Our standard Micro-USB connector is firmly mounted and we've included a cable too.

Overlay guide where you need it
When you're soldering your project, it's good to know what you're connecting to! All of our boards and shields have a thorough pinout and guide printed on the bottom as well as the top, so when you're soldering underneath there's no need to flip the board over constantly.

D13 pin works for everything
The digital I/O pin 13 functionality has been fixed, the D13 indicator LED no longer loads up this pin when you use it as an input.

Mounting holes and power jack
We've included a fourth mounting hole in the bottom left, there's no more wobbly board troubles if you're fitting it to a case.
Helpful markings for the Power Jack size, polarity and voltage are right there on the board when you need them. Auto-power switching and self-resetting fuse protection are standard.

It's all in the same place
The power jack, headers and ICSP are all in exactly the same location as Arduino standard boards. The Eleven is perfectly compatible with all Arduino shields, projects and sketches.

What's in the box?