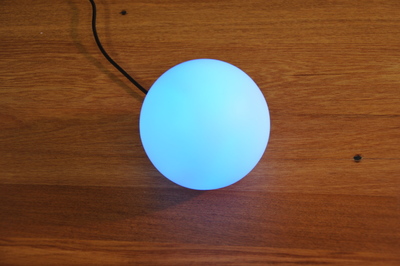 Introducing the OrBlink, a USB connected RGB LED Orb, plug it into your computer (any will do, no drivers required) and use it to indicate whatever you can imagine.

I (Hadley) came up with the idea for making one in early 2013 when our Mr3, our 3 year old got confused about when to get out of bed. Daylight savings had ended and it was quite dark in the mornings, this meant Mr3 didn't know if it was really early or not.

Mr3 already has a low power computer in his room which we use to play music for him so I thought I could leverage that for power and logic to control an RGB (Red Green Blue) LED and show him when it was an okay time to get up.

I wanted something nice and soft and diffused so it didn't cast shadows in the room, kids don't tend to like that much. So I hunted around and found some nice little plastic orbs or spheres, about 80mm in diameter. These were designed as a color changing LED to start with, but battery powered and not controllable.

I purchased up a few orbs and when they arrived I pulled one apart. There was a small circuit board in there with a couple of cheap batteries and LEDs, conveniently held together with screws for easy removal.

This was the time I turned to the Internet and typed "avr usb rgb led" into DuckDuckGo (which is a great alternative to Google but that's another story). The "avr" in there is for a type of microcontroller from Atmel, much the same as what's used in Arduino Boards, the rest of the search is pretty self explanatory. The first link in my search was to some code written and kindly published by some bloke called Dave back in 2009 who built something pretty much exactly the same, thanks Dave!

With that information found I knew pretty much what I needed to do, a simple circuit based on the ATTiny85, a RGB LED and a few other passive components. I put together an ugly little prototype on a cut down square protoboard (we were all out of round protoboards) with bits I found around the workshop hanging off it left right and center. Ugly it may have been but it worked first try which is always a bonus.

Using my newly found interest in designing custom printed circuit boards (PCBs) I set out and created a replacement PCB that would fit in the existing little base of the orb. Here's the schematic I came up with. 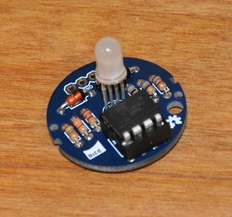 I sent my board design off to Hackvana, the friendly custom PCB making service, a short time later I had some prototypes in my hand. Here's what they look like, assembled with all the through hole components, but not yet mounted in the orb.

Looking at the little built up PCB made me think that perhaps other people might like to build one of their own, and it fits in pretty nicely with all the other stuff we sell, so I decided to make up a bunch of kits and put them up for sale on the website here.

There are a few other very similar products around all created recently such as the Blink(1) by ThingM and the BlinkStick by Agile Innovative. They are all based on the same basic hardware and principle, most of them are based on the same source code too. I think ours is neat since we made it of course, and it comes in a neat little Orb which looks great sitting on a table.

All the source code for the OrBlink is available on GitHub, including the hardware design files (created in Eagle), the firmware to run on the ATTiny85 firmware (modified from Dave's code, which is originally based on a V-USB example), a C command line program to control the OrBlink (again based on code by Dave), and some Python code written by me based on pyusb.

Why not pick up an OrBlink Kit today, learn some new or practice your existing soldering skills, and end up with a neat useful little gadget at the end of it.

Have you got any questions or comments? Want us to consider stocking pre-assembled ones? Anything else? Let us know in the comments below or get in contact directly (especially if our comment form spam protection is being hyper active again).

All the best - Hadley

Posted by Hadley Rich on Friday, 21 June 2013 at 09:00, tagged as customer projects, art, electronics. You can leave a comment.

Excellent service. Efficient Delivery and no problems at all. I cant wait to give the raspberry pi to my step dad for Christmas . Dom W