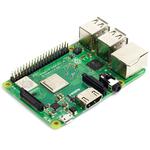 Things that are the same as the Rasberry Pi 3

Faster processing: Improved thermals on the Pi 3 B+ means that the CPU on the BCM2837 SoC can now run at 1.4GHz, a 17% increase on the previous Pi 3 model (which ran at 1.2GHz). Video performance on Pi 3 B+ is similar to the previous generation Pi 3, the VideoCore being clocked at 400MHz for video processing and the 3D graphics processor running at 300MHz.

Faster networking: The Pi 3 B+ has significantly faster wired networking, thanks to an upgraded USB/LAN chip, and you should see speeds that are 3-5x faster than on previous models of the Pi, at least 300Mbit/s. Also included is a new faster, dual-band wireless chip (CYW43455) with 802.11 b/g/n/ac wireless LAN and Bluetooth 4.2. The dual-band 2.4GHz and 5GHz wireless LAN enables faster networking with less interference (although the higher bandwidth has less range), and the new PCB antenna technology should allow better reception.

I/O: The GPIO header remains the same 40 pins, as on the previous three models of Pi. There is a new PoE header pins close to the GPIO header which may contact components on the underside of some HATs. Standoffs (we have available on the store) will prevent this. The metal shielding on the wireless circuitry and the SoC may also cause shorts against larger components on the underside of HATs standoffs will help here again.

Who wants pi? The Raspberry Pi has made quite a splash since it was first announced. The credit-card sized computer is capable of many of the things that your desktop PC does, like spreadsheets, word-processing and games. It also plays high-definition video. It can run several flavours of Linux and is being used to teach kids all over the world how to program... Oh yeah, and it does all that for under $50 (yes, that bit doesn't really apply to New Zealand dollars).